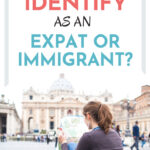 With global working on the rise, more and more people are packing up and living abroad. But whether you’re a recent grad moving out of the US or someone moving overseas after 30, you’ll soon be faced with an identity crisis: deciding to call yourself an expat vs immigrant vs digital nomad.

On the surface, these terms seem pretty straightforward. However, if you start reading about the topic of moving abroad on Facebook, Reddit, or even in a newspaper, things are far from crystal clear.

“Expat” is viewed as elitist. “Immigrant” has a bad connotation. Online workers fight over who can rightfully call themselves “digital nomads”.

It’s a bit of a minefield, especially when you’re already struggling to overcome the dozen other challenges of living abroad.

And the fun doesn’t stop there. Because even after you settle on which of these identities best fits you, the people around you (physically and virtually) will end up using their own labels to describe your place in the world.

Plus, there will always be new research papers and think pieces that redefine these concepts. It’s the nature of language to change over time, after all.

Regardless, there is value in examining the immigrant vs expat vs digital nomad debate. Let’s take a look at what these terms mean, and how those meanings have changed over time.

What is an expat?

According to the Merriam-Webster Dictionary, an expat (short for expatriate) is “a person who lives in a foreign country”.

Based on that definition, expat is synonymous with immigrant. But as we discussed earlier, there is more nuance that’s developed over the years.

Today, expat is widely accepted to mean a person who lives and works abroad on a temporary basis, with the intent to eventually return to their home country.

The key word here is “temporary”.

Technically, anyone calling themselves an expat should not be planning to permanently live in their foreign country. And yet, you’ll encounter plenty of people (particularly retired Brits living in Spain) who staunchly refer to themselves as expatriates despite their intent to finish out their lives in Costa del Sol.

To understand why people cling to the expat label, we need to look back at history.

A brief history of the word expat

In the mid-60’s, government agencies and wealthy companies (often oil and gas) started sending their American and European employees on overseas work assignments. These were short-term deals, typically lasting only a year or two.

During this time, the employee would generally keep receiving their original salary, and their housing and other costs of living were often covered as well.

As you might imagine, these people–and the family they brought with them–were able to live quite comfortably.

Because they had no intention to remain in their new country after their assignment was finished, the term “immigrant” didn’t seem to fit. Hence, they started being referred to as expats.

And thus, the image of the wealthy foreigner living overseas and not integrating into the local culture was born.

What is an expat wife?

The term “expat wife” was used to describe women who moved with their partner when they were sent to work abroad. These women were generally unemployed, though not always of their own choosing.

In many cases, expat wives were unable to work in the foreign country, whether it be for legal or cultural reasons.

Unfortunately, that led many women to lose their sense of self during the years they lived overseas. It also led to the stereotypical image of a wife who spent her days drinking cocktails by the pool and spending her husband’s money while he was away at work.

While expat wives (and husbands) still exist today, there are far more countries that now allow dependents the right to work locally. Not to mention the amount of opportunities for remote working.

What is an immigrant?

Returning to Merriam-Webster once more, an immigrant is defined as “a person who comes to a country to take up permanent residence”.

The key phrase here is “permanent residence”. Immigrants are people who leave their home countries behind and intend to live in a new country forever.

What is the difference between expat and immigrant?

In the simplest terms, an expat is someone living abroad who plans to return to their home country, while an immigrant is someone who moves to another country and plans to stay permanently.

And yet, there is more to unpack here. Namely, why do people who are clearly immigrants refuse to take on the label?

Sadly, being an immigrant has become increasingly politicized and vilified. Just look at the US’s treatment of Mexican immigrants, the UK’s Brexit campaign, or any number of nationalist-driven sentiments that have been cropping up once more.

Immigrants are often portrayed as low-income foreigners who’ve come to take away jobs from upstanding citizens. It’s a gross misrepresentation repeated by conservatives, a boogeyman image used to scare people into voting a certain way.

The reality is that many people would rather align themselves to the wealthy foreigner stereotype of the expat than the poor immigrant stereotype, with no regard to the actual definition of the words.

Ironically, this refusal to adopt an “undesirable” label has cast expats in a bad light. The term has become synonymous with elitism and even racism.

Unfortunately, I don’t see any of these connotations changing anytime soon. So regardless of which term you choose to identify as, be prepared for judgment.

What is a digital nomad?

A digital nomad is someone who conducts their work online or over the phone while moving from place to place. While digital nomads are often portrayed as people working remotely overseas, many of them choose to move around within their home country.

Unlike expat and immigrant, digital nomad is fairly new to the lexicon. It was first made famous by the 1997 book Digital Nomad, though it may have been in use before then.

This newness, combined with the rapid increase in remote working in recent years, has led to some interesting “gatekeeping” of the label.

For example, it’s not uncommon to see online arguments between digital nomads about how long you can stay in a country before you cross into expat territory.

Before the advent of “digital nomad visas”, many of these workers were often (illegally) entering the country on a temporary tourist visa. They had to move on or do a border run every six months to avoid overstaying.

However, with more and more countries implementing renewable remote working visas, the need to constantly be on the move is disappearing. It will be interesting to see how the term “digital nomad” changes in the coming years.

Expat vs immigrant vs digital nomad: who am I?

Knowing all of this, you’d think I have a clear idea of which term applies to me. However, after three years of living in England, I’m still not sure what I am.

I suppose I still consider myself an expat, though I would revise that to “immigrant” should we decide to remain in England.

And yet, I’m not sure we’ll ever return to living in the US, so can I truly call myself an expat?

What if you plan to move from country to country until you die, but you don’t work remotely? Are you just a nomad then, or something else entirely?

In our ever-globalizing world, it surely won’t be long until a new term will join the expat vs immigrant vs digital nomad debate.