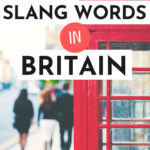 Most Americans in the UK don’t expect there to be a language barrier with the locals. It is an English-speaking country, after all. But there are more differences between British vs American words and slang than you might realize.

“I want to change into nicer pants before the meeting. Can you fill me in if I miss the beginning?”

These statements sound fine to Americans. But if you said this to a Brit, they’d be shocked and confused!

If you can’t understand what’s wrong with the sentences above, you’ll find out by the time you finish reading this post.

Even after 3+ years living in the UK, I’m still learning new British expressions–and discovering that some American ones have VERY different meanings across the pond.

This post will be a crash course in American vs British words and sayings for expats and travelers, from cheeky pints to washing up liquid.

British vs American Names for Food

British English slang is an essential part of the language. I don’t know if it’s their cultural love of wordplay or if I’m just imagining things, but it seems like Brits use more slang in their everyday speech than Americans do.

Here are some common British phrases you’ll encounter in daily life, along with a few sayings that will throw Americans for a loop.

Does what it says on the tin

You’ll come across this British saying a lot when you’re reading product reviews. It’s a similar meaning to “gets the job done”, though the closest American slang equivalent is probably “as advertised”.

For example, a shampoo that claims to bring out the natural curls in your hair–and actually works when you use it–would be described as doing what it says on the tin.

In general, a product that does what it says on the tin is adequate–it performs as expected but doesn’t have any extra bells and whistles (excuse my use of slang to describe more slang!).

Like the American slang “budget-friendly”, cheap and cheerful is mostly used to describe businesses like shops and restaurants.

These places offer products or services that are basic but decent quality and offer good value for money.

It’s not enough to just have low prices–a measure of quality and ambience have to be present. A dark and grimy chip shop would never be considered cheap and cheerful no matter how affordable the food is.

Primark, a chain of clothing stores, is often called cheap and cheerful.

Something bog-standard is basic, or “standard issue” as Americans might say. If you were getting a new home built and didn’t pay for any upgrades beyond the builder’s basic finishings, you’d get a “bog-standard” house.

In the context of British vs American words, I find this one especially odd. Given that bog is also slang for the toilet, you’d think bog-standard would be a negative thing!

Spanner in the works

Definition: Causing things not to go as planned

If something messes up your plans, it’s said to be a spanner in the works. Just when everything is going smoothly, an event happens that ruins or delays things.

For example, if you’re going on holiday abroad and your flight gets delayed, causing you to miss your connection to the final destination, that delayed flight was the “spanner in the works”.

Fun fact: there isn’t much difference between the British vs American slang. Americans would say “wrench in the plans”, and a spanner is simply an adjustable wrench.

It’s no secret that Brits love gossip. Ironically, they also love their privacy. And thus, the “curtain twitcher” is born.

Curtain twitchers are the American equivalent of nosy neighbors. But in the UK, people tend to do their spying from behind their own window curtains at a polite distance (unlike nosy American neighbors, who will stroll right up to your front door for a conversation).

One of the downsides of living in England is how close together the houses are compared to the US. Thus, it’s not uncommon to spot your neighbors poking their heads through the curtains if there’s outdoor work/a party/unexpected visitors in the area.

This is the newest British saying I’ve added to my lexicon. To be snowed under is to be overwhelmed with challenges or things that need to be done.

The American slang equivalent is “bogged down” or “swamped”.

If your boiler broke down, your child got sick, and your dog made a huge mess all on the same day, you’d describe yourself as snowed under.

When you ask someone to do the washing-up, you’re asking them to clean the dishes. In modern times, that typically includes rinsing the dishes, loading the dishwasher, and hand-washing anything that can’t go in the machine.

Keep this phrase in mind when you’re at the supermarket–you’re looking for “washing-up liquid” and not “dish soap”. Just another one of those quirky differences between living in the US vs UK.

Jamie Oliver’s 30 Minute Meals show taught me this British slang for turning things all the way up. It’s often used to describe turning your stovetop heat on the highest setting.

A race car dashing to the finish line would be driving at top whack.

Definition: Having a beer during your lunch break

This is one of my favorite British sayings. Drinking culture is very different in Europe vs the US, and it’s fairly common for people to have a glass of wine or a pint of beer if they’re dining out for lunch.

If you walk through London’s financial district around noon on a workday, you’ll see tons of well-dressed men enjoying a cheeky pint outside the pubs.

Definition: Making fun of someone in a light-hearted way

Making self-deprecating jokes and poking fun at your friends is a quintessential part of British culture. When you’re taking the p*ss out of someone, you’re having a bit of fun at their expense.

Understanding sarcasm and being able to take a joke are very important skills to have if you want to fit in here. That being said, taking the p*ss should never cross the boundary of being hurtful.

Definition: Attempting to do something; Attacking someone or something

The British saying “having a go” has two different meanings.

In most cases, it’s used to describe when someone is trying to do something. For example, a person trying to open a tight jar lid would be “having a go” at it.

It means the same as the phrase “give it a go”.

The alternate meaning to “having a go” is to attack someone or something either physically or verbally. When the tabloids print negative stories about the royal family, the writers are “having a go” at them.

You hear this British slang used more frequently in London, where there’s a high concentration of wealthy people. Walking through neighborhoods like Balham, Wimbledon, and Highgate on a weekday morning, you’re sure to spot a number of “yummy mummies” in designer clothes (or athleisure) pushing buggies along the pavement or having brunch together.

Don’t let the film by the same name fool you: “the full monty” simply means “everything”.

Many places serving full English breakfasts will name the menu item The Full Monty. If you bring five outfits, multiple pairs of shoes, and a dozen accessories, you’d have packed the full monty.

I recently stumbled across this British slang on Reddit, where a man described his retaliation against someone who spit in his face.

Having grown up in the US where “fill me in” means to get caught up on the details you missed, I was very confused. As it turns out, the British slang meaning of “fill him/her in” is to assault someone, generally via a punch to the face.

So the next time you miss a meeting at the office and need a recap, be careful what you wish for!