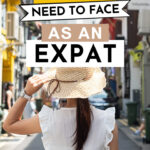 TV and movies love to romanticize the life of an expat. We’re fed intoxicating images of attractive young men and women who jet off to foreign countries to “find themselves” (usually with the help of a gorgeous local). But the reality of expat life is far less glamorous.

I’ve written a lot about the advantages of living abroad, and with good reason–living outside of your home country is a richly rewarding experience. However, there are several downsides of expat life that rarely get discussed or portrayed in popular media.

Let’s pull back the curtain so you can decide if the life of an expat is right for you.

Being an expat is not the same as being a tourist

Before we moved to London from the US, I imagined being an expat would mean spending lunch breaks reading at a cafe and evenings exploring the city. But what I quickly discovered during my first year of living in London was that I didn’t have the time or energy to see the city like a tourist can.

When you’re on vacation, you have few to no daily obligations. Everything is taken care of for you–restaurants cook your meals, maids clean your room–and all of your energy goes towards enjoying the destination.

Unless you retire abroad or move somewhere with a crazy low cost of living compared to your salary, the daily life of an expat is pretty much the same as that of a local resident. You work, you cook, you clean, you grocery shop, you make dentist appointments… And after all that, you’re often too tired to spend your lunch breaks and nights out on the town.

That being said, the first year or so does feel like you’re playing tourist in your new home. Going to the local coffee shop feels like an adventure, and the novelty of living somewhere completely different can fuel your wanderlust. Even short trips just outside your neighborhood can seem like mini-vacations.

You need to properly plan for the expat lifestyle you envision

We all have our reasons for wanting to move abroad.

When my husband and I weighed the pros and cons of living in London, the ability to travel Europe frequently and cheaply was at the top of the pro list. We envisioned long weekends in Paris and leisurely summer holidays in Italy. But I also dreamed of renting a chic central London flat.

Had we not carefully planned what we wanted our future London life to be like, we could have ended up living in a charming apartment…eating cheap ramen and daydreaming about traveling Europe.

Getting caught up in dreams and fantasies is a normal (and fun) part of the process! But if you don’t take your vision a step further, you could end up a very unhappy expat.

Make your own pro con list. Do your research into the cost of living. Create a budget that accounts for your desire to travel or dine out every weekend or whatever else matters to you.

Read my moving abroad checklist to ensure you don’t miss a step in the planning process!

Uncertainty and impermanence are constant companions of the life of an expat. Unless you have dual citizenship or the EU’s freedom of movement, your ability to stay and live in a foreign country is tied to the length and validity of a visa.

Some visas are good for five years. Some only last for one before they must be renewed. And with every renewal comes the fear that a paperwork mistake or government mix-up will prevent you from carrying on life in your new country.

While many residence visas have a path to permanent residency or citizenship, it could take a decade (and thousands of dollars) before you’re eligible. Until then, you’re at the mercy of bureaucrats and your visa sponsor, which is often your employer.

Friends, family members, favorite restaurants… These are the obvious things we’re prepared to miss after moving abroad. But it’s the little, unexpected bits of home that will randomly drive you to tears at 2pm on a Wednesday.

I miss my mother’s potato salad, which is impossible to make in the UK because they don’t sell that variety of potato here. I miss seeing bluebonnet flowers blanket the highway medians after the first spring rain. I miss the warmth and smell of pulling clean clothes out of the dryer, even though I hate folding laundry.

It’s completely natural to long for the comforts of home. Just be prepared for those feelings to hit you at unexpected and sometimes inconvenient times.

Your expectations of how things work will be thrown into disarray

Our understanding of how things work is shaped by our home culture. In the US, you expect grocery stores to be open on Sunday night. In Italy, a 9pm work phone call would be unacceptable.

We take these understandings for granted. But when you move to a foreign country, even simple things like how to preheat an oven or make a doctor’s appointment can seem ridiculous or inefficient.

As an over-planner, I spent a ton of time researching how to move to the UK and how to get settled. However, one thing I overlooked was broadband setup.

Growing up in America, I assumed you could get internet service connected in a matter of days. Unfortunately, it took nearly three weeks for them to activate our service in London, even though all of the wiring and equipment was installed!

Frustrating? Yes. But it’s simply how the system operates here.

You’re bound to encounter similar challenges in your new country. Having an open mind and learning how to cope with culture shock will make your life as an expat much easier.

RELATED: How to Move Out of America in 10 Steps

If you’ve ever lived several hours away from your family, you might think moving abroad won’t be so bad. I thought the same thing and was sorely mistaken.

Before coming to the UK, my husband and I spent four years living a seven hour drive away from our immediate family. We only saw them a few times a year, though I did talk to my mom multiple days a week.

After moving to London, we continued to see each other a few times each year. But with the time zone difference, it was much harder to stay in touch.

And then 2020 obviously brought its own set of challenges.

There’s now an ocean separating us instead of a long but drivable expanse of land, and I feel that distance keenly. Most people who move overseas after 30 can probably relate.

As I noted above, we return to the US multiple times a year to spend time with family. And while we cherish these visits “home”, it feels like our reunions happen in a bizarro world, an uncanny valley that no longer feels comfortable and familiar.

One of my favorite living abroad quotes sums it up perfectly:

It’s a funny thing coming home. Nothing changes. Everything looks the same, feels the same, even smells the same. You realize what’s changed is you.

When we step out of our home country and into unfamiliar territory, we’re confronted with new ideas and ways of thinking. It’s that confrontation that pushes us to grow, both mentally and emotionally. After living the life of an expat for a year, you’ll see your native country through a new lens.

Coming to terms with this conundrum is one of the biggest challenges of living in a foreign country.

I take comfort in Marilyn Gardner’s reflections on being an expat:

Our homes are not defined by geography or one particular location, but by memories, events, people and places that span the globe.